Following a road accident on the Bidford Bridge in Warwickshire, significant repair work was required to the stone parapet, spandrel wall and central pier of the ancient monument. Sky Scaffolding provided the access scaffolding for Croft Building & Conservation Ltd to complete the masonry repairs. 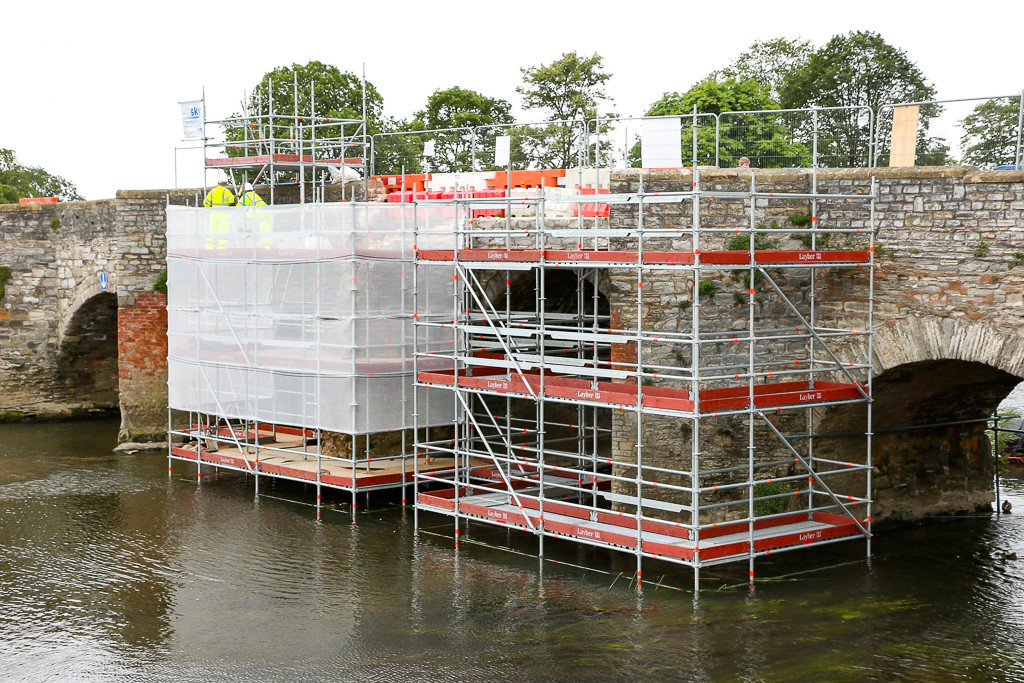 The scaffold design had to consider the ancient monument status so we were unable to tie into the the structure.  We were unable to suspend a scaffold from the carriageway because the bridge could not withstand the kentledge weight required.  The chosen solution was for the scaffold to be founded on the river bed with tubes secured around piers providing anchorage.

Our scaffolders wore life jackets while constructing this scaffold and we were supported by the River Avon Trust who provided a safety staff throughout the works. 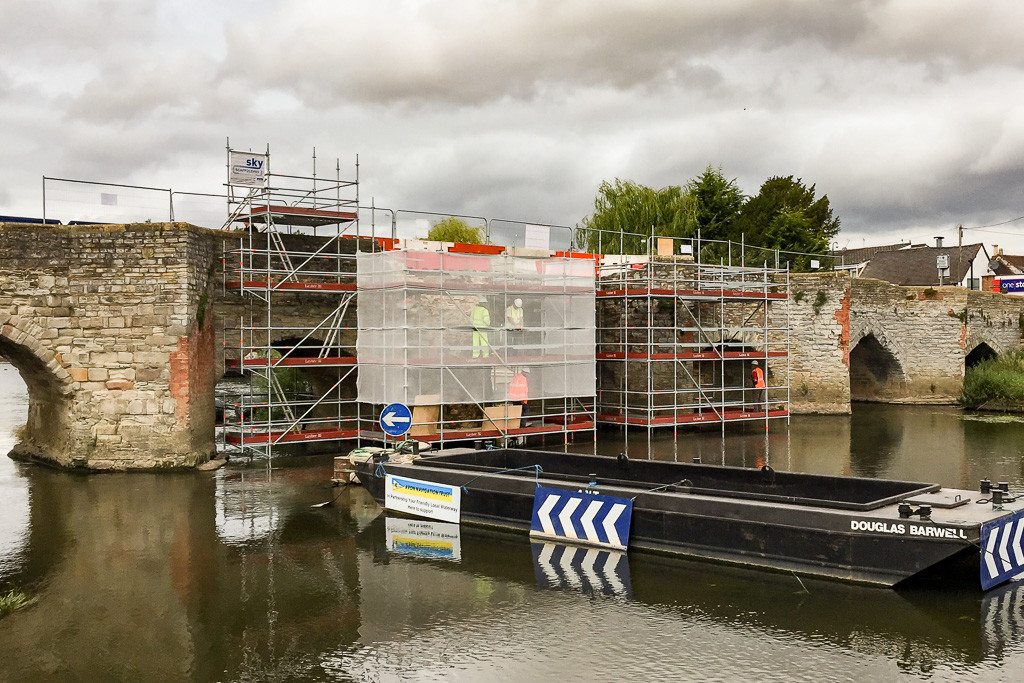 Debris netting was provided to contain any dust that was produced during the works. 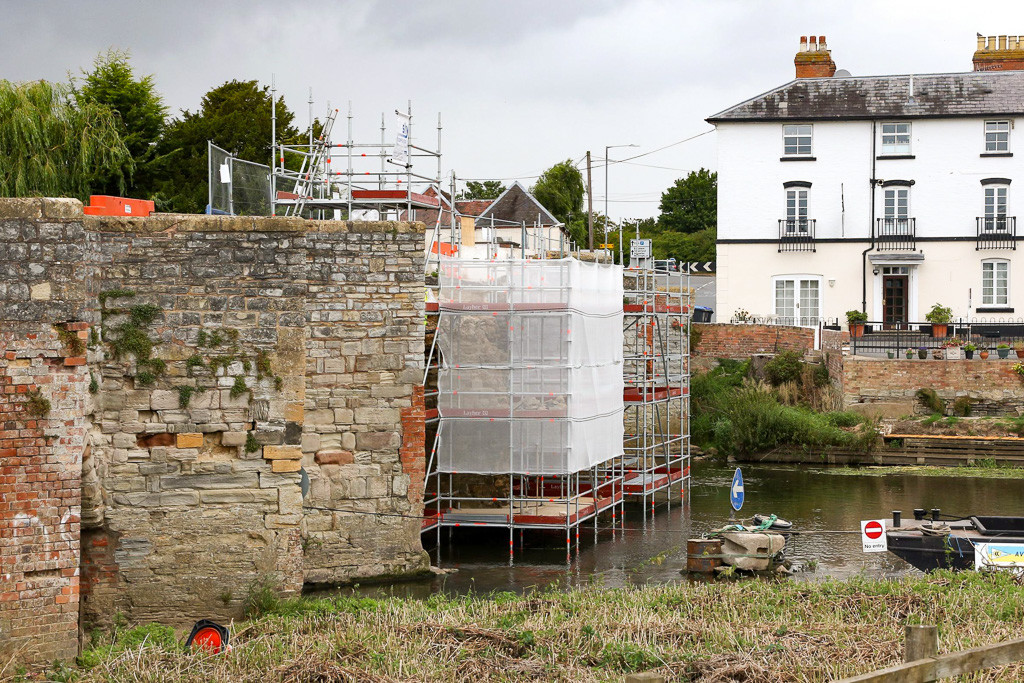 The scaffold took 5 days to erect and was on hire for 20 weeks. 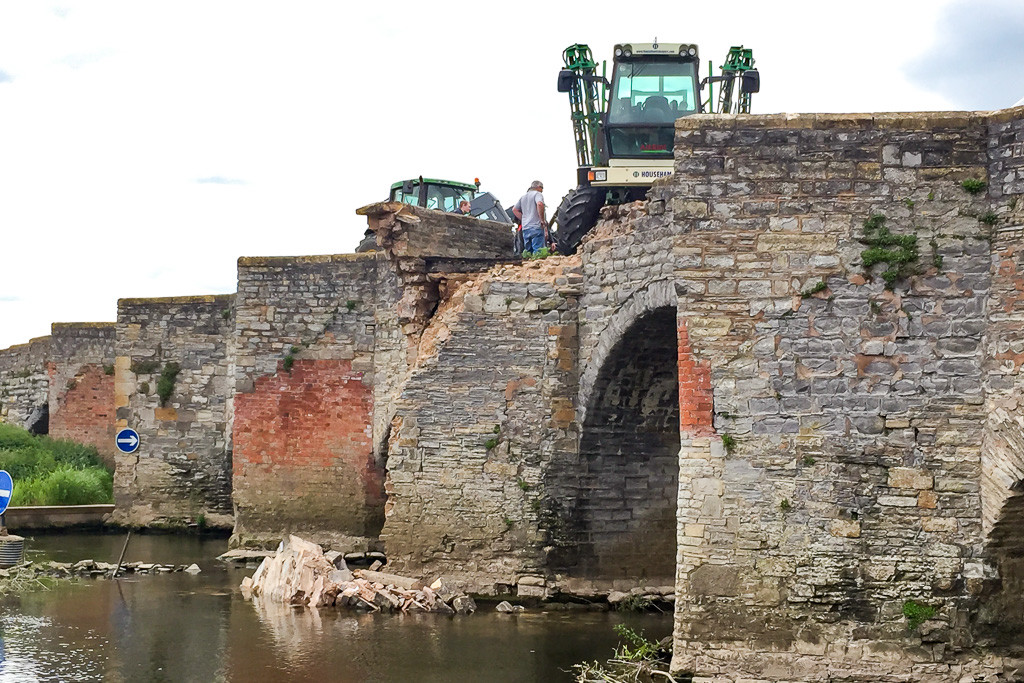 View of the damage to the Bidford Bridge pier.

Benefits of the Layher Allround Scaffolding System on this Project

The fact that Layher Allround was used in this tricky situation shows its great versatility to be used in almost all situations.  Sky Scaffolding worked with the Layher design team to produce a solution that considered the status of the bridge and provided the means of access for our client to complete their work.

Placing a scaffold in moving water presents additional risks that need to be managed. Generally we would seek to avoid placing scaffold in the water however in some situations it is the only option available to provide access for works to be completed.

All structures founded in waterways risk being affected by scour erosion at the base, and scaffolds are no exception. An added complication is that the footings cannot easily be inspected. The design has to take the possibility of scour erosion into account and provide some redundancy. Considering the scaffold design for Bidford bridge, if the foundations were eroded then this would not cause a sudden catastrophic failure of the scaffold, there would just be some visible settlement that would be identified during pre-use and weekly inspections and rectified.

If however we were looking to span a watercourse with a scaffold bridge and supports founded in the water, this would present more of a concern due to the critical nature of the support foundations. In these cases it may be necessary to consider casting a concrete base in the water to found the scaffold on. We are carrying out a similar such scheme at Mill Hill Bridge in Baginton.

In smaller watercourses and shallower waters, scaffold strikes from debris and trees are only likely to occur during times of flooding, at which time the scaffold would not be in use. So the only risk is damage to the scaffold or bridge, which can be assessed and remedied after the flooding has subsided.

BBC News
An article on the Bidford Bridge collision was featured on the BBC News website and even featured on a TV news bulletin.

Bidford Bridge Wikipedia
Wikipedia provides extra information on this ancient monument and mentions the repair work that was carried out here.